The University League officially voted to disband the organization on June 6th, 1998.  In a newsletter announcing the decision, Capelle offers a small explanation for the disbandment but does not go into much detail concerning the factors that went into the decision itself.  “The members in attendance at the June 6th meeting agreed that the League had met its goals and objectives set forth in 1974 thanks to a lot of hard work by a lot of people from 1974 until now.”  The newsletter also states that a new Second Gear Advisory Board was created to assist in the transfer of managment from the League to the AMA and that the Board will maintain control over the finances of the shop until they feel that the student organization can manage it appropriately on their own. 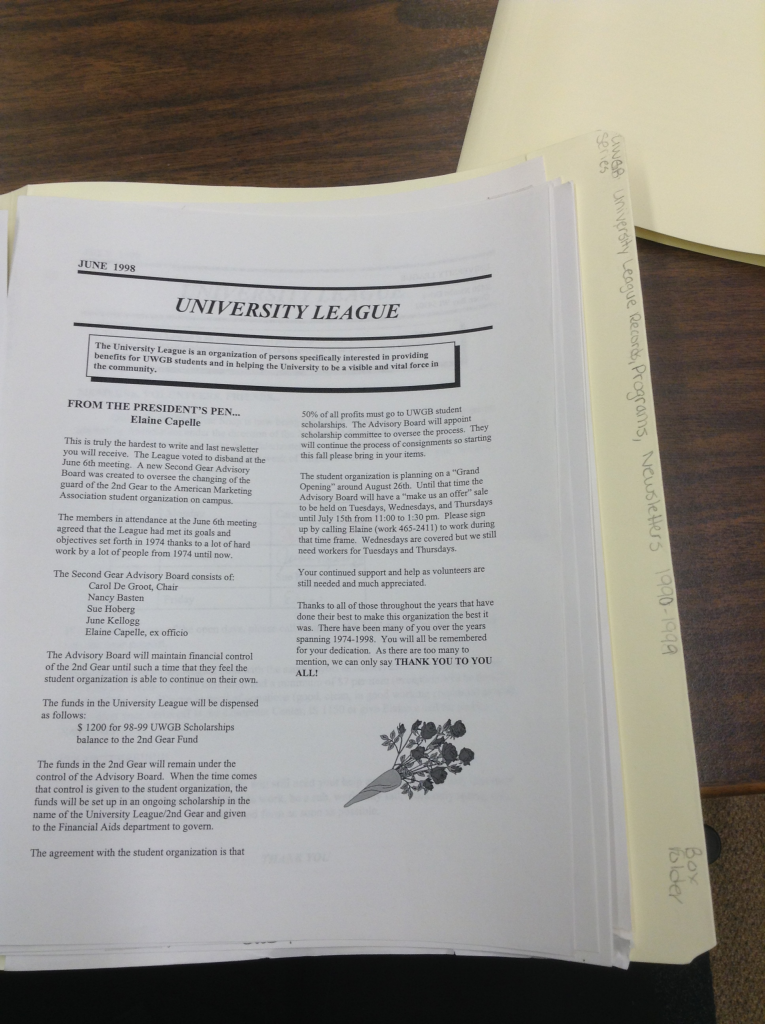 The following document is the 1997-98 annual report for the University League.  This document sums up the previous academic year’s League activities and contributions, and it also gives the members some explanation as to why the chair, Elaine Capelle, has recommended that the league be disbanded.  She also provides suggestions for members who still wish to contribute to the university in some way.  Elaine Capelle’s recommendation for the disbandment of the League provides more insight into the decision to end the organization.

“The mission of the League was to promote social, intellectual, and service relationships among supporters of the education mission of the University of Wisconsin- Green Bay to the Green Bay community.  We were organized by people specifically interested in providing benefits for UWGB students and in helping the university to be a visible and vital force in the community.  We have served our mission well.  Our job is done.  The community of Green Bay know who and what we are all about.  The Chancellor has taken over the social aspect with his annual picnics and gatherings.  Many scholarships are now being given by many organizations and members of our community.  However, there never seems to be enough scholarships to go around given the number of well deserving applicants.  We have done our job well and now it is time to move on.”

This part of the document provides multiple reasons for the disbandment of the University Women’s League.  Essentially, the League’s usefulness had run out.  There were other avenues for the university to take to accomplish the same things.  A big part of their organization was the hosting of social events, but like the document states, the Chancellor took over many of these responsibilities, so the League was no longer necessary.  Scholarships were also being funded by many other organizations and individuals by this time so it was not the League’s sole responsibility anymore.  Also, the Second Gear was no longer under their command.  The League did not appear to be an essential piece of the university community anymore.

“I am recommending that the University League be discontinued.  I say that with much regret.  But the facts speak for themselves.  Our energies can better be used to help advise and develop students to continue our work making scholarships available to the students at UWGB and operate the Second Gear Shop.  I have put together some bylaws and policies and procedures I would like your support on.  As it is impossible to get people to run for office and maintain the League as before, this seems the appropriate step to take… this will give some continuity to the League and those who put their hearts and hard work in getting the League and the Second Gear to this point.”  As this quote implies, there seems to have previously been an ongoing attempt to maintain the League, but they could not attract the volunteers and leadership that they needed to continue their mission. 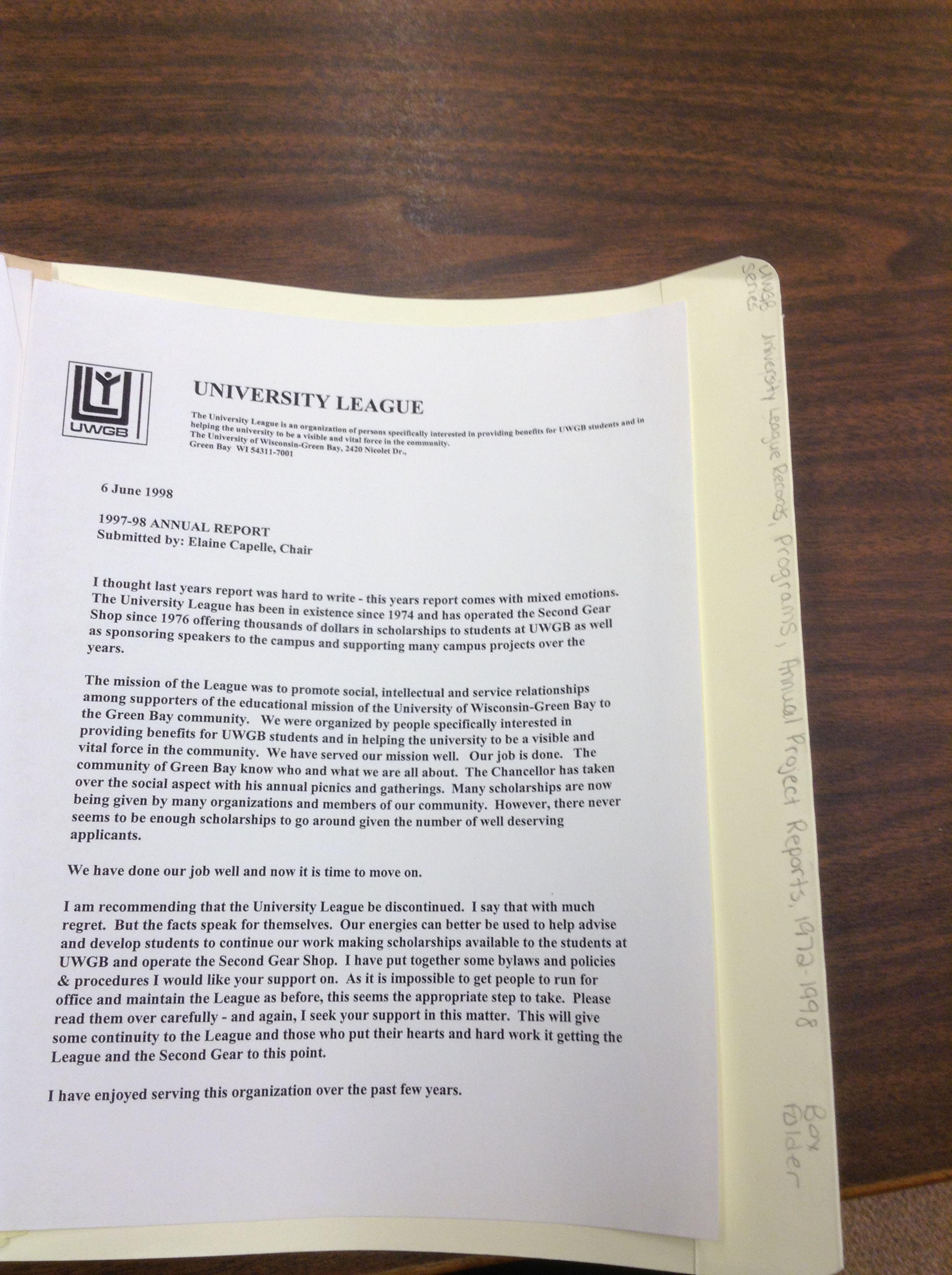 Further evidence of this ongoing issue of recruiting officers and volunteers is present in the 1996-97 Annual Report.  The final paragraph in this report states: “As our invitation to this meeting has indicated, our outlook doesn’t look so good.  The League has always had a problem getting officers to serve, volunteers to work, etc.  Today we may have to make some very big decisions.  If we see a future for the 2nd Gear and the University League, it has to be a combined effort of us all.  I hope and pray we make the right decisions as we go forward.”  This statement shows a general concern for the League at the conclusion of the 1996-97 academic year.  As it turns out, their concerns were valid.  The following year would bring about the change in Second Gear management along with the unfortunate disbandment of the League. 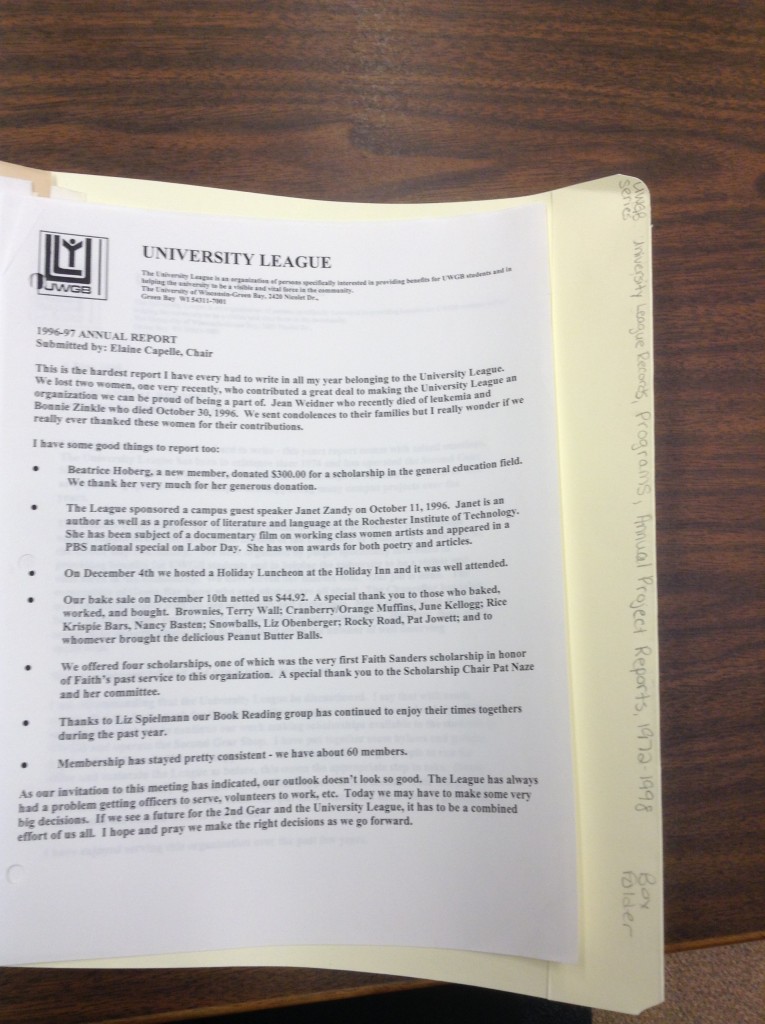