In the early 1980s, the University League’s membership waned. Jeanellyn Christie who was the League’s president from 1980-1981 noted in her annual report that interest groups were smaller than in previous years. One reason she gave for this was that members were busy with other endeavors. Although the League prided itself on organization, some members would join groups without filling out the proper forms.

In 1981, the next president of the University League, Carol Vandeneven detailed a poor turnout of an event the group hosted called the Phoenix fun night. It took place October 9th, 1981. She stated that while their was a tremendous amount of publicity provided for the program, few people, aside from the board (and their families) attended. The total attendance was 25 people. Vivi L. Dilweg, who was an attorney, served as their speaker for the event and spoke on the subject of marital property. 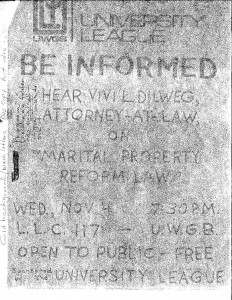 Carol Vandeneven expressed disappointed after their later Fall event had 34 people in attendance and said that she wished to revisit the idea of whether or not the League should continue to host programs in the spring because of the poor turnout. The possibility for having fewer programs instead of cutting them out completely would depend upon future events.

In the communication chair report of 1981, it is documented that the League had a drop in bulk mailing which resulted in their being eliminated from it for that time period. This was because membership fell below 100 and they were told they were wasting paper.