The backbone behind the University League was its members. They would be the ones working in the Second Gear Shop, choosing who the scholarships went to, and of course hosting the parties and get togethers for everyone to enjoy. Lorna Kay expressed her motivation behind joining the group,

“I joined in September, 1978, when we moved to Green Bay. Harvey was on the faculty and we knew no one. I thought it would be a good way to meet other university ‘wives’… there was a large cohort of faculty and staff who were the same age and going through similar life stages for quite a long time.”25 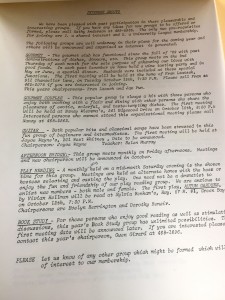 Perks of being a member of the League would change from year to year, but most were focused on Interest Groups. These groups would be different activities such as antiques, crafts, cooking, bridge, and more.

The beginning years of the organization offered the widest range of interest groups and activities; however, as time progressed and values started to change with the new members, so did the interest groups. A call was put in the November 1, 1979 League newsletter, University League Communique, for new interest group ideas.

As membership started to change from just faculty wives to include community members and other staff, the University League needed to make it known that everyone was now included. Throughout the University League Communique in 1979, the president of the organization would post informational advertisements encouraging everyone to join. 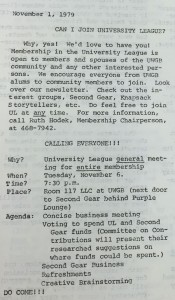 Taking the change one step further, in January of 1980 an amendment to the University Leagues By-Laws would be proposed that would include more inclusive language toward membership. 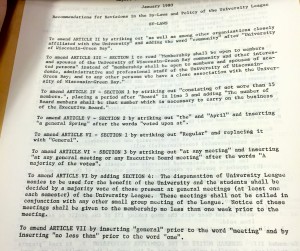 Despite the use of the accepting language implemented in the University Leagues By-Laws in 1980 the members, interest group participants, and those involved would dwindle.