In the University League’s early years, the intent of organization saw a major shift in their intentions in a short period of time. In the 1960s through the early 1970s the University focused mostly on social gatherings between its members. As it progressed, it became more active in the community and in hosting events with the intention of raising money for various causes. In 1968, the League held a get acquainted party intended for members only. The $10 profit made from the event, was donated to UWGB’s Mauthe Center. While this donation was a contribution toward the University, it was small in comparison to the league’s later contributions. The League also socialized with other local womens’ leagues such as Manitowoc’s and St. Norbert’s.  The group held tea gatherings, annual Christmas parties, picnics, and other social parties. 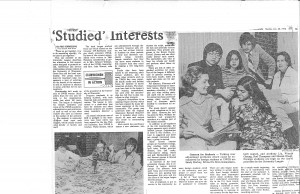 In 1973, the League saw an expansion in their interest groups. These new groups were for bird watching, cross country skiing, and quilt tying. As the group expanded, so did their interest in the community events they held. The picture above is a newspaper article from 1974 that details that the organization was focusing less on socializing and more on events for students, with the exception of the annual tea party.6 The League during this time began a loan program that pledged 100 dollars short term to students who displayed demonstrated need, without interest.  The money loaned to students was constantly recycled as it was repaid. Another charitable contribution were the toys they donated to the daycare on campus and holiday boxes to families in need.