Troubles of the Child Care Center:

From the start, the child care center has had problems. The center has had funding troubles from the beginning.They could not find a building to be located in, and later their director and main teacher resigned,Pat Schoenbeck and Ann Cook. Parents became angry about how the center was being run. It is not hard to see why the center closed.

Funding was scarce, so in the first meeting’s minutes focused heavily on the cost of everything, even toys for the children (1). In the early 70’s, the center had trouble just finding a building to host a care center in. The building the care center looked at in 1971 was not owned by the university. They could not use this building because they could not simply purchase it (Meeting Minutes,1). Money was tight, so no unnecessary spending could be made.The three universities that had day cares in the 70’s joined together to plead with the state for funding (Letter,1). This ultimately failed. 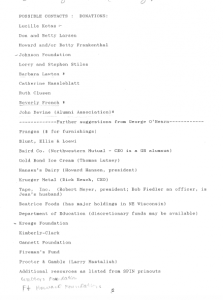 This Photo shows the costs of trying to switch buildings.

Funding troubles continued in the form of not being able to compensate its teachers, which was stated in “Part I: A Crisis in Child Care Staffing “(2). Eventually, this lead to the resignation of the director and a main teacher. In the letter to Ms. Hill it is explained to a parent that even though the director has left the mission statement is still their goal: “Pat Schoenbeck’s abrupt resignation, less than one week before the children were to arrive, has obviously caused problems, but I assure you the UWGB commitment to quality child will continue” (1). Parents of children enrolled in the care center were concerned about the future of the center because of these resignations. The parents worried that the centers standards would drop and that the center would become mediocre like many other day cares in the Green Bay area. 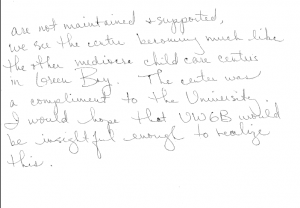 This is one of the surveys a parent took.